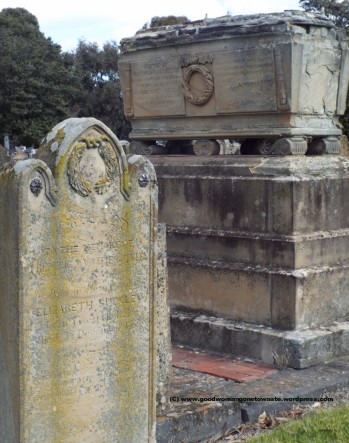 Andrea often cut through the cemetery on her afternoon walks, it meant she could walk further and then take the short cut home.  She also enjoyed it.  If you ignored the graves, it was like walking through the park of a great house.  It was over a hundred years old, and the same principles of a manor house’s garden had been used in the cemetery’s layout.  There were tree lined avenues, stands of native and exotic trees, manicured lawns and formal gardens.  Andrea didn’t ignore the graves, in fact she liked them.  They added another, peaceful aspect to the place.  On her regular strolls, she had come to be familiar with the names on many of the stones, and she regarded them as she did neighbours, friends to acknowledge as she passed.  In spring it was awash with colour and the scent from the many blooms, both growing and left on grave sites, and she often took her camera to capture the flowers, birds and bunnies that were plentiful.

Today, she was out walking later than usual.  It had been overcast and dark, with rain well into the afternoon.  She had decided to venture out when it had finally started to clear, but now she realised her mistake.  In the middle of winter it was almost dark by five pm even on a sunny day, but on a day like today with the heavy cloud cover, it was now nearly black as night.  She hurried on, anxiety rising as she noted that in the darkening light, the cemetery wasn’t such a pleasant place to be.  The dark shapes of trees and tombstones took on a sinister air, especially those stones topped by large crosses, looking like figures with arms spread wide.  Even the usually cute rabbits, which would dart between graves at her approaching footfalls, unnerved her now.  Headlights from cars in the streets outside would occasionally bounce across wet, polished marble, putting Andrea in mind of demented fire flies and it was easy to imagine unseen horrors lurking in the darkness.

She normally followed the long sweeping main roads that wound from one side of the cemetery to the other, but now she decided it would be quicker if she cut through some of the grave areas and followed the smaller, mostly unsealed roads.  She knew she would have to watch her step – rabbit diggings could twist an ankle if she wasn’t careful, and as her unease increased, she stepped up on to curb and hurried between graves.  It wasn’t long before, with an overwhelming wave of panic, she realised her second mistake.  Off the main roads it was easy to lose your bearings.  Landscapes and landmarks, so familiar in daylight, were unrecognisable in the ever increasing darkness.  She thought she was completely lost for several minutes, until, managing to slow her breath and calm herself a little, she recognised the billowing shape of the willow trees that lined the little creek that flowed through the park.  All she had to do was follow along the bank until she came to one of the main roads and the stone bridge that would cross it.

It was almost pitch black under the long tendrils of willow, waving in the wind.  She kept to the very edge of the tree-line, the sound of the rustling leaves filling her ears, and tried not to let her imagination run away with her.  Finally, ahead, she could make out the clear space of a roadway, and she quickened her pace.  Stepping out into the road, she saw that the bridge wasn’t much brighter than her walk beside the creek, the huge willows towering over each side of it.  She moved to walk out in the middle of the path, it felt safer somehow, and hurried across the ancient stone spanning trickling water.

Suddenly, a scuttling sound behind her made her turn, and she expected to see a rabbit, but could make nothing out in the gloom.  Fear once more increasing, she hurried along the road but she was still completely lost.  Nevertheless, she knew if she kept on this path it would eventually lead back to the road she usually took.  Again, a noise behind her made her jump.  She turned and this time, something moved in the shadows.  ‘Hello?’ she called.  ‘Is someone there?’  There were often gardeners and maintenance workers out in the park and she hoped it was someone to help her find her way, but no. Only silence.  Perhaps it was a rabbit after all.  She continued to walk again, but now she felt as though she were being watched.  She glanced behind her and caught a glimpse of movement. Just a dark shape, too big to be a rabbit.  A fox perhaps?  She knew they lived here too.  As she watched, a shadow peeled away from those around it and moved towards her.  Panic gripped her now, and she hurried her steps.  There was definitely something there in the darkness, not only watching, but following. She could hear it moving now.  Did foxes attack people? Or was that only wolves.  She braved another look over her shoulder, and the shape seemed to change and shift as she watched.  Now it was too big to be a fox, and she was sure she could see yellow eyes glinting in the darkness.  Complete panic engulfed her.  What was it?  Nothing good, that’s for sure and she knew now she had to run.

With feet and heart pounding, she knew she had to keep to the road, the risk of falling too great if she again headed among the graves.  Glancing back every now and then when she dared, she could see the dark shape moving among the gravestones, and with each glimpse she knew it was getting closer.  Several times, a large shape loomed beside her and fear tightened its grip until the form resolved into a stone Christ, or an angel with wings outstretched.  She didn’t know how much longer she could run, surely she should have come to the road she knew by now?  How long had she been lost? Would they have locked the gates yet? If she did find the right road, would she be able to escape.

Finally, she saw that the road ahead branched in three directions. Which way should she turn? Left, right or straight ahead?  Which was the road home? Desperately, she searched the gloom for any familiar terrain, something she recognised.  Her lungs felt ready to burst, a stitch was tearing at her right side and still she could hear the rustling, scuttling noise behind her and occasionally glimpse the shifting, shadowy, menace.  Her gut told her to head to the left and without thinking, she ran that way.  She was beginning to slow now, her body heavy, muscles screaming and she knew she would have to stop.   Gasping for breath, she slackened to a fast walk, massaging the pain in her side.  She looked behind her, terrified, waiting for the shadow to pounce.  Again, the yellow eyes stared from the darkness and she cried out, and quickened her pace, jogging, stumbling and sobbing between laboured breaths.

She looked ahead and her heart leapt.  She knew where she was now.  She recognised the shape of a date palm in its roundabout and the road leading to the gate she usually exited by.  The gate that led to a busy, main street.  The street that led home.  And luckily the gate was still open.  She was heartened enough to run again now, and as fast as she could.  The gate loomed closer and closer with each step and she could see headlights passing the opening to what she hoped would be safety.  Her heart pounding, she pushed her weary legs even harder.  Only a few more metres to go, only a few more minutes.  She began to allow the weight of fear to lift a little as she moved closer and closer to the gate, when suddenly a dark shape separated from one of the huge conifers by the side of the road and moved out into her path.  Terror and despair gripped her once more, but she was running too hard, too fast to stop.  She was upon the figure in seconds, slamming hard against the body of a man.  His strong arms gripped her tightly and he said, ‘My God, you’re white as ghost.  Whatever’s wrong?’

Eyes wide and heart thumping, she looked up into the face of Simon, her husband, and all fear dissipated as she melted into his arms.

‘Something’s following me,’ she gasped.

Simon peered into the darkness over Andrea’s shoulder. ‘I can’t see anything.  Are you sure?’

‘Of course I’m sure.  I’m not imagining things.’

‘Well, you’re safe now.  I was worried, you being out so late, thought I’d come and wait for you.’

‘I’m so glad you did. Let’s get out of here,’ she said breathlessly and they turned and hurried, arm in arm, out into the street.

Behind them, in the cemetery, a shadow shifted and yellow eyes watched as they walked away.  Slowly separating itself from the darkness around it, a shape, huge one minute, smaller the next, made its way back to the creek and along the bank to the bridge. There it blended into the blackness beneath the stone arch and settled down for the night.  Another one would be along at some point. It could wait.

All content is subject to copyright and may not be used without permission from the author.